"I will be your loyal guard, until you quest is completed."
"No... Even after your quest, I'll stay by your side until the end of time."

Start
"I often see gatherings beside the lake... What happens there?"
"Fishing? Sounds like fun! Can I try it, too?"
Finish
"Haha! If the catch is good, I can cook it up!"

Start
"Digging like crazy... for treasure?"
"Archaeology... I've heard of it before... Can I try it?"
Finish
"Haha! How about you do all the digging? I'd rather not get my hands dirty!"

Start
"This weapon and I share a birthdate."
"I've heard that humans are experts at forging things. Perhaps those skills can improve my weapon..."
Finish
"That's very helpful. Maybe now I can enhance my Lance and Shield."

Start
"I'm a picky eater, and I don't really enjoy food all that much."
"That said, would you like to try my cooking?"
Finish
"These tools and ingredients don't seem too bad. I'll see how it goes!"

Start
"Battle skills? The most important thing is preparation!"
"So how about it? Can you get me the proper equipment?"
Finish
"Excellent! This equipment is top-notch. It seems you have an eye for quality gear!"

Start
"Only those who are true to themselves can understanding the meaning of victory."
"I will demonstrate, if there are fragments of the Key of Gaia."
Finish
"Okay, everything's ready to go! Now, allow me to demonstrate." 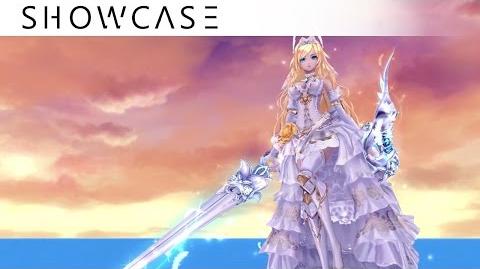 Astraea is based on Athena, the Greek goddess of wisdom, arts, warfare, battle strategy, heroic endeavor and reason. She is the daughter of Zeus and Metis, the patron god of Athens, and one of the twelve Olympian gods. Athena represented the disciplined, strategic side of war, in contrast to her brother Ares, the patron of violence, bloodlust, and slaughter.

'Astraea' is a Greek goddess who governs over innocence and purity, and the daughter of Astraeus and Eos. She is closely associated with Dike, the Greek goddess of justice and fair judgement.

Parallels can be drawn between Astraea and Athena, as the latter is also known as Parthenos (meaning "virgin") because she was believed to have never married or taken a lover.

Astraea was dubbed as 'Goddess of War' and 'Goddess of Victory', two attributes that originated from Ares and Nike respectively.

Retrieved from "https://aurakingdom.fandom.com/wiki/Astraea?oldid=53952"
Community content is available under CC-BY-SA unless otherwise noted.