The Cube of Gaia is the central power in the world of Azuria. It is the reason for the existence of the three realms of Azuria: Aura Kingdom, Pandemonium, and Terra.

Is it said that the Cube fell from the cosmos.

Eidolons are capable of linking into the Cube of Gaia. After completely linking, the Eidolon can bring back an item they have recovered.

Concept art
Add a photo to this gallery

A Cube of Gaia in the center of Navea 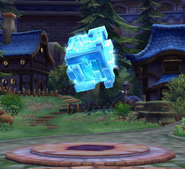 Artwork of Gaia sitting on fragments of Gaia Cube
Add a photo to this gallery
Retrieved from "https://aurakingdom.fandom.com/wiki/Cube_of_Gaia?oldid=46726"
Community content is available under CC-BY-SA unless otherwise noted.