"Hehe... What is it? Why are you blushing? Do you want to be with me forever? Of course, that sounds great!"
"Haha, you're so shy! No matter what you ask of me, I'll always help!"

Start
"Say... since you're such a seasoned world traveler, what do you think is the best material for making a new outfit?"
"I'm in the mood for some new jewelry..."
Finish
"Eureka! Once refined, this material will make some amazing jewelry!"

Start
"I've got the odd feeling that something's missing... Can't you feel it too?"
"Yes! Fish scales! I heard that some special scales make amazing jewelry... Do you know anything about them?"
Finish
"Wow...! You sure do know what you're doing! If I use these to make some new jewelry... You'd like that right?"

Start
"Next up... these two items! Haha, have you thought of any special combinations?"
"Maybe you and I have similar thoughts... I'm counting on you!"
Finish
"All dressed up on a sultry night like tonight... Wanna go out, master?"

Start
"Unlike Astraea, I don't have a shield to protect myself..."
"Could you help me find some suitable protective gear, please?"
Finish
"Thanks! You're the best! I hope you'll still protect me, though..."

Start
"Hmm... what's the relationship between Alucard and Bealdor? Does Uriel stand a chance of becoming..."
"Haha! I'm blessed with the powers of divination, didn't I ever tell you? Say, could you help me find some items?"
Finish
"Wow, that was fast! You really wanted to know more about it, huh?"

Start
"Here's my riddle: There's a special something that not only enhances your abilities, but also makes you catch the eye of other women."
"It could help break the ice between you and me, master. What am I referring to?"
Finish
"Ha, you're pretty smart! So, do you want me to give this gift back to you? It's a pretty useful item..." 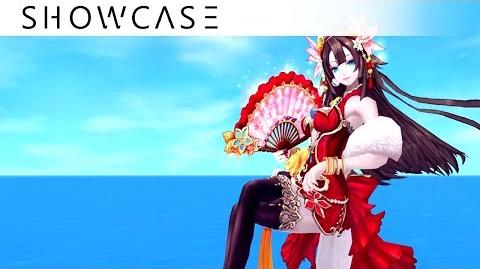 Diao Chan was one of the Four Beauties of ancient China. She was said to be so luminously lovely that the moon itself would shy away in embarrassment when compared to her face. Unlike the other three beauties, however, there is no known evidence suggesting her existence. It was mentioned in Chinese historical records that Lü Bu had a secret affair with one of Dong Zhuo's maids and was constantly afraid of being discovered. She is best known for her role in the 14th-century historical novel Romance of the Three Kingdoms. In the novel, she had a romance with the warrior Lü Bu and caused him to betray and kill his foster father, the tyrannical warlord Dong Zhuo.

The name "Diaochan", which literally means "sable cicada", is believed to have been derived from the sable tails and jade decorations in the shape of cicadas which adorned the hats of high-ranking officials in the Eastern Han dynasty.