"I've kept a very close eye on you during the time we've spent together... You seem like a strong willed person. I think I can share everything with you."
"Hahaha! It's decided then! From now on, whenever Ghodroon is around, you don't have to worry about your adventuring expenses!"

Start
"Earlier I was by the side of a river when I saw a boy who was fishing. I wanted to tell him the fishing line wasn't tied tight enough..."
"But he ran away as soon as I opened my mouth. Perhaps I was too ugly! Haha!"
"Help me give this fish to him! To show my sincere apology."
Finish
"Though I suppose giving him money would be a faster way. Give a man a fish, he eats for a day. Give a man money, he can buy a fish?"
"Of course, he could buy something else too! Maybe he doesn't even like fish. Who knows? Haha!"

Start
"The child that I mentioned last time, he was helping his grandfather to fish,"
"but his shoes are so old and torn. With the riverside being so muddy, he could slip and fall!"
"Help me get him a pair of shoes that is suitable for fishing!"
Finish
"I think this pair of shoes should be of great help to him! Haha!"
"Anyways, thanks for helping me get these!"

Start
"I don't think I have properly observed the metals in Terra."
"Help me get some special ones!"
"I want to look more closely into the difference between these and the melting flame."
Finish
"All done with the gathering? Wow, faster than I expected! Must be due to those special skills of yours. Haha!"
"You're right! We could buy these,"
"but getting them from you would make it more meaningful."

Start
"I heard that all the food in Terra is of the finest quality."
"You've traveled all over the place, so you should know a lot about the food all over this world."
"Can you help me pick a food from both land and sea? I'm sure that your selection will not disappoint me."
Finish
"These dishes are so delicious, I'm hungry for more..."
"Have I ever told you I was a bit greedy when it came to eating? Now you know."

Start
"I've heard that there are many things people in Terra refer to as treasure."
"I want to know more... So, could you help me out with that?"
Finish
"Oh? So these are some of the treasures found here in Terra! I will add them to my collection."
"No, I don't really like collecting treasures."
"But these are special, because they come from you! So they're a worthy treasure, wouldn't you say?"

A Goad for Ghodroon[edit | edit source] 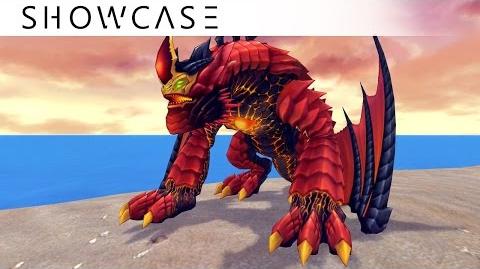 Ghodroon is based on Fafnir, the son of the dwarf king Hreidmar and the brother of Regin and Ótr in Norse mythology. After Ótr was killed by Loki, Hreidmar received the cursed gold of the dwarf Andvari's as repayment for the loss of his son. Fafnir then killed Hreidmar to get all the gold for himself. He became very ill-natured and greedy, eventually turning into a serpent or dragon (symbol of greed) to guard his treasure. Regin plotted revenge and sent his foster-son Sigurd to slay the dragon. Corrupted by greed, Regin planned to kill Sigurd too to take all the treasure to himself. His plan failed however when Sigurd, having eaten part of Fafnir's cooked heart and acquired the knowledge to understand birds, was warned by birds.

Retrieved from "https://aurakingdom.fandom.com/wiki/Ghodroon?oldid=53966"
Community content is available under CC-BY-SA unless otherwise noted.