"You and I were made for each other! Let's run away together!"
"Haha, why so shy! If we're traveling together forever, isn't it like we're eloping?"

Hoarding with Hel I[]

Start
"Lately, I've been keeping an eye out for some shiny, gleaming treasure."
"But however hard I look, I just can't seem to find any..."
Finish
"Amazing! Thank you! I've been looking for so long..."

Start
"I have a few items that I cherish above all others."
"But I haven't seen them for several days... do you think they could have been stolen?"
Finish
"Ah, thank you! I'm so happy!"

Handmade by Hel I[]

Start
"My brother's birthday is coming up, and I'd like to make him something special..."
"Perhaps you could give me something to get me inspired?"
Finish
"Perfect! Now I know just what to make..."

Start
"Hmm... I don't think there's quite enough material..."
"Can you help me find a bit more?"
Finish
"Thank you so much! I'll be sure to tell my brother we made this together..."

Start
"The food's all ready! And with this beautiful dress, I'm nearly ready!"
"But I'm still missing just a few things... Can you help me out one more time?"
Finish
"Ah, perfect! My brother will be so happy! Haha!"

Start
"What's this thing you used to summon me? Ooh, shiny!"
Finish
"Wow! It's so mysterious... Does this mean we're destined to be together?" 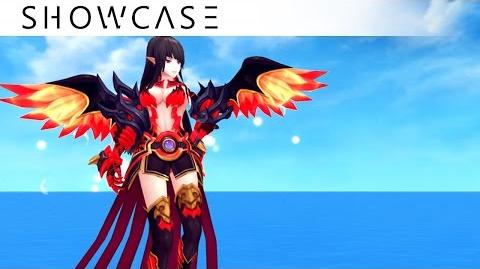 In Norse mythology, Hel presides over the realm with the same name (the underworld), where she receives a portion of the dead. She is Loki's daughter and sister to the wolf Fenrir and serpent Jörmungandr. She was appointed by the god Odin as the ruler of a realm and played a key role in the resurrection of Baldr. Her appearance is described as half blue and half flesh-coloured, further having a gloomy, downcast appearance.