Odum Ryan is a Makar Warrior, the third and youngest. son of the Ventos Chief, Leo Ryan. He has two brothers, Palo Ryan and Para Ryan - the first and second prince respectively. He is first encountered in Alabastren Temple and the source of the troubles in Crescent Hill. He sought the power in the Temple to defeat his brothers and commands a number of Makar.

Odum Ryan has orange skin, a reddish-brown mane tied on either side and darker brown horns, glowing yellow eyes and an impressive set of sharp teeth and fangs. He wears yellow leather armor with a brown cape.

After becoming a <Templar>, he wears the usual Templar armor and uniform and wields a Great Axe with Templar motifs.

Holding the great pride over Makar tribe, he sought the power and willing to do anything to obtain it. However after he was defeated by the Envoy at Alabastren Temple, he start to change the way of power itself, furthering establishing a new honor of Makar that he will act with wisdom and not resorted by Brute Force just like Makar usually do.

Sometime after leaving the Ventor Prairie, Odum Ryan went to Crescent Hill and stole the Crescent Gem from the folk of Lunarin. He is encountered in the Alabastren Temple as the Rebel Leader. He led a band of Makar to seek out the sealed power in the Alabastren Temple. To accomplish his goals, Odum Ryan enlisted the aid of the Mistwalker Gnomes after defeating them in battle.

He is the penultimate boss of the Alabastren Temple and wields an axe. After being defeated, he will accept his loss graciously and - upon conversing with the Envoy - will become aware of the consequences of his actions. He will return the Crescent Gem and assist the Envoy against the final boss of the Temple.

After the final boss of the temple defeated, Odum want to be the Envoy's apprentice but refused by Envoy. He decide to go on journey to hone his skills as a warrior while searching for wisdom that will guide him and possible, Makar to the better future.

The Envoy meets him in Oblitus Wood during the Oblitus Wood questline with assisting Analisa, the Templar Blacksmith. He helped both Envoy and Analisa by becoming the Envoy of the church to make a peace treaty with Silverflash Tribe which ended up succeded by having agreement that the tribe can access the water and they will leave the village at once. He arrives in the final area of Ghostweep Cavern after the Envoy defeats <Duke of the Beyond> Talen. He is reccomended by Analisa to become a Templar which he initially refuses but Envoy and Analisa convince him which makes him agree to join the Templars.

Before the battle, Analisa donned Odum with new Templar Commanding Officer Armor, same like Victoria, Alex and Anya wears but the armor was larger than any Commanding Officer's armor which Analisa told him to quit his squirk because she doesn't want him to keep lamenting about her handywork after she got hard time measuring his size. He is seen in Lion's Roar Stronghold at Vulture's Vale leading the Makar forces in taking Black Tooth City. The Envoy is sent to report to him after securing Black Tooth City.

He along with his father, Leo Ryan are on the front line to defeat Winged Duke to avenge his brother, Para Ryan's death. He have a hard time convincing his father to stop the all-out assault because their strategy will be proven futile by the Winged Duke itself which just as he thought. He join his father in the pursuit of Winged Duke but later trapped by Duke's trap but the Envoy arrived at the nick of time however he was also captured. When the Winged Duke want to absorb Leo, Odum awaken his power and break free from the seal which gave the Envoy time to free all the soldiers and Leo. Once all are freed, Winged Duke retreats and Odum along with Leo also retreat back to the camp. After further persuasion by Odum and spending time alone for a while, Leo realize about his mistake and he apologize to Odum because of his rashness that if the Envoy did not aid them in the nick of time earlier, he could ended up in the same fate as Para Ryan. He start respecting Odum by letting him giving the order in order to minimize the casualty further ever since he witness his son has changed from his journey.

- after you have successfully completed defeating Odum Ryan at the Alaspbastren Temple instance. 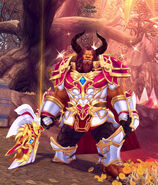 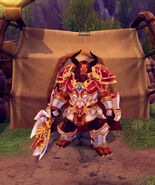 Retrieved from "https://aurakingdom.fandom.com/wiki/Odum_Ryan?oldid=37669"
Community content is available under CC-BY-SA unless otherwise noted.