"Even though you will never surpass master Dante, you have performed admirably. I will treat you as a friend instead of a servant."
"Say what? That's not enough? Bah, you have a lot of nerve. Fine, I'll stay with you forever."

Start
"Justicia helped make my bag. She did a wonderful job!"
"But she also built a threshold that she can never cross..."
"You're my servant, think of something! Consider it a test!"
Finish
"Are you sure this will help? It won't hurt me, will it?"
"... I guess I have to trust you."

Start
"Dante seems so sad lately... He doesn't smile nearly as much as he used to."
"That Fire Angel must have hurt his feelings! How terrible!"
"Hm... But if I get rid of him, then Dante will be sad... What should I do?"
Finish
"You're cleverer than you look! I'll have to remember that..."

Start
"Oh, no no no... Dante is going to see that damned Fire Angel!"
"If things keep going like this, he'll take Dante away from me!"
"I've got to think of something... Some way to make sure Dante only pays attention to me!"
Finish
"So efficient - that's why you're my servant!"
"This is sure to get Dante's attention!"
"Oh, my beautiful Dante...I hope he notices me..."

Start
"You've probably guessed that there's something special about my Lassie."
"For one thing, she eats a special formula that I make just for her."
"If you want to, I suppose I could let you make it this one time..."
Finish
"You've passed the test! We can be friends!"

Pandora's Past and Present[edit | edit source]

Start
"Even though it happened so long ago, it feels like it was yesterday."
"I just wanted to find someone who would never leave me."
"... You might be my friend now, but... You... You'll leave me one day, won't you?"
Finish
"... I... I received your gift. Thank you... Thank you for being my friend in spite of everything." 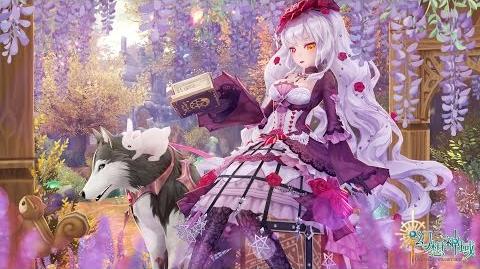 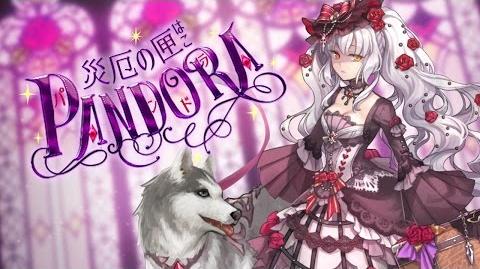 In Greek mythology, Pandora (also known as Anesidora) was the first human woman created by the gods. Zeus ordered Hephaestus to mold her out of earth as part of the punishment of humanity for Prometheus' theft of the secret of fire. Each god endowed her with unique gifts: Athena clothed her, Aphrodite gave her beauty, Apollo gave her musical ability, and Hermes gave her speech. Prometheus had warned his brother Epimetheus not to accept any gifts from Zeus. But Epimetheus did not listen; he accepted Pandora, who opened a jar (or a box in modern interpretations) which released all the evils of mankind. Only hope remained in the jar after she closed it.

The name Pandora means "All Gifts" while Anisadora means "Many Gifted" in Greek.

Retrieved from "https://aurakingdom.fandom.com/wiki/Pandora?oldid=53989"
Community content is available under CC-BY-SA unless otherwise noted.