Players of the game can form a party with other Envoys that is likely to be sharing a same quest, working together gather experience points, or defeat monsters they simply can't themselves. Parties occur mostly around dungeons.

The Party Search can be activating by pressing J: 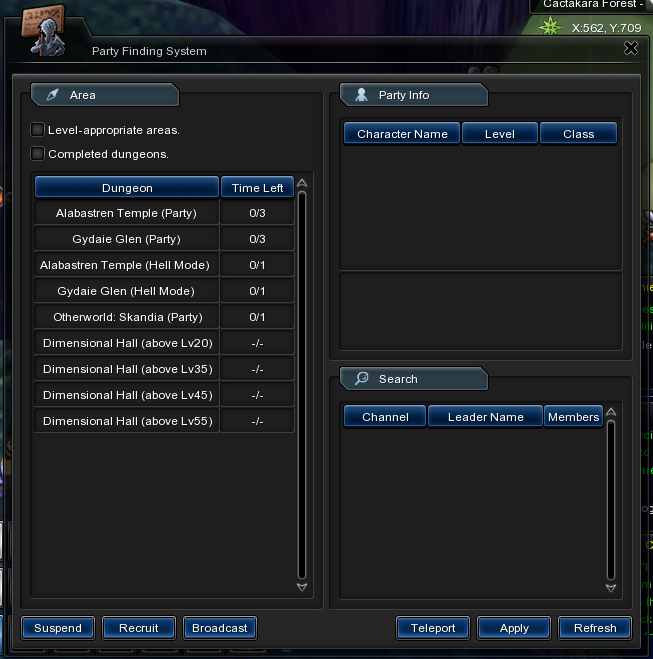 A party could be created in a few different ways. The most simple is to right click a selected target and invite them to join your party. After that, you have created your party if the other player accepts.

To be in a party, the player could ask to the party leader or any other member to join. But even if asked to a member, they have to get permission from the party leader since they are the ones who could invite you. If they agree, they will right click on your player and select Invite Player. You can either accept or decline the request.

Sick of the party later? A party is not a guild, so you can see or fight with them only once if you decided not the break away. However, if it is a friend, you could always invite them anytime. To leave a party, simply right click yourself and click on "Leave Party".

The party leader is automatically the player who created the party. To pass over leadership, simply right-click at the desired player's status bar and select "Pass over Leadership". The party leader can also kick other players by selecting "Kick Party Member" instead.

The party leader is also responsible for the Teleport feature in the Party Search. When the leader presses the teleport button, a status bar with all party members will appear and indicate if the members have accepted the teleportation or not. If a single player declines, the teleport will be canceled. If there is a disconnected or offline player in the party, the teleport will also be canceled.
Retrieved from "https://aurakingdom.fandom.com/wiki/Party?oldid=17920"
Community content is available under CC-BY-SA unless otherwise noted.