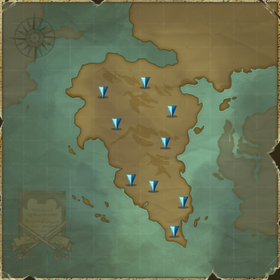 Port Skandia is a location in the world of Terra, located in South Midgard of Grazeus.

Located at the southern tip of South Midgard, Port Skandia is a quiet, prosperous port nestled between forested mountains and the sea. It serves its own military personnel, the Garrisons, led by Kane. Despite being a quiet and serene fishing village, many changes take place out of sight, unbeknownst to the average traveler.

Port Skandia serves as the starting location for all new players. The monsters tend to be weak and less aggressive than the monsters outside of Port Skandia. Every player here are the Garrison Member of Skandia Templar Knights before resigning due to being an Envoy of Gaia.

An ancient ruin can be found in the forest of Port Skandia, which, if the text of the ruins is deciphered, states that a hero will be born in Skandia, but he may also become a demon capable of destroying the fabric of the universe. A problem arises when the village chief's son is kidnapped by Brian, who one day came into contact with a spirit. This tainted him with an evil curse, changing his personality entirely. Brian assaulted the residents of Skandia and retreated to a hidden cave, where he held the village chief's son captive. It was then a garrison member with an Eidolon came to stop him. Due to the curse and his hunger of power, Brian transformed into a demon from Pandemonium. With the fear of becoming like Brian, the Envoy resigns from the garrison member and departs from Port Skandia to learn more about themself and the Eidolon for the safety of the natives.

Skandia is a port town and home to most of the natives in Port Skandia. Established alongside the ocean, Skandia serves as a dock for ships. Fish make their territory around the dock and coast. A lighthouse is built on the edge of the cliff.

Skandia is run by the village chief York, who is married to Sheila. Many of the residents include Anita, Betsy, Corey, and the Envoy of Gaia.

The Logging Site is located just outside the town of Port Skandia. Several lumberjacks can be found cutting through the trees. Bunnyhops and antelopes also roam the site, along with the rare monster, the Local Bully Bunnyhop Boss.

The Statue Ruins is located north of the Logging Site. The entrance to the Ruins Cave, home of the Giant of the Ruins Keda, can be found near the ruins. Petal and Forest Fairies swarm the area. Flower can be found examining the area for old relics. According to the translated relic fragments found in Statue Ruins, "a hero will be born here, but he may also become a demon that could destroy the fabric of the universe."

In the northeastern area of Port Skandia is the Hushglen Hollow. One can find the lone home of Elena. The Immortal Bird Sunbird King is found near the cliff side of the hollow.

Timbria Forest make up the northwestern portion of Port Skandia. A quiet streaming river flows through the forest, with the entrance to the Hidden Cave can be found in the northeastern area. Garrison soldiers are working diligently to stop the twisted monster Brian.

The portal to Helonia Coast is found northwest of the forest, known as Ringwood. It is frequented by the residents of Skandia.

Retrieved from "https://aurakingdom.fandom.com/wiki/Port_Skandia?oldid=51825"
Community content is available under CC-BY-SA unless otherwise noted.