Quests are tasks of Aura Kingdom that the player can accept and finish to gain experience, money and other rewards.

There is no shortage of tasks to complete in the world of Azuria. All across the world you’ll find people who require assistance. Completing quests for these people is the primary way to earn experience, which helps your character to grow more powerful, strengthens skills, and allows them to equip better gear.

People who have requests to make of your character, an Envoy of Gaia, will have an exclamation point floating above them.

This quest icon is also visible in the map.

The quest tracker on the right side of your screen displays a list of active quests. It will give a brief summary of where to go, who to meet, or what to kill to complete that request. In many cases, left-clicking a quest objective will allow your character to auto-path to the place they need to go. 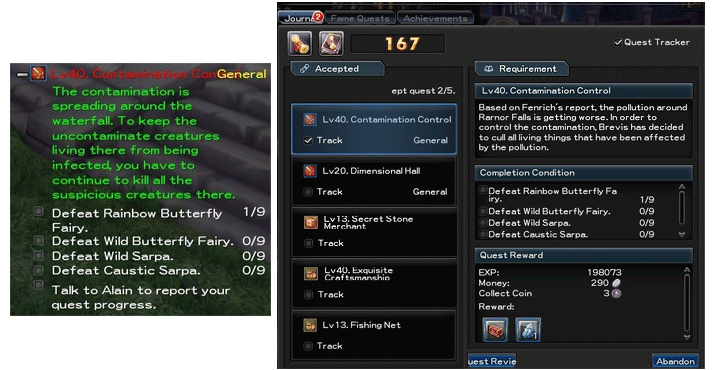 The quest log is divided into three tabs. “Journal” lists storyline quests and side quests. “Fame Quests” displays quests that reward fame points. “Achievements” are side quests around the world that award Loyalty points as well as useful items.

Left-click any quest on the left side of the quest log to display that quest’s details on the right.

In the middle, right side of your page, under your mini-map, is your mini-quest log/helper. If you click on the task which should be in white text at the very bottom, the text should high-light in light green. Now you are going to click on the text and your character should automatically go to that quest spot. It does not matter if it is a battle or a quest to talk to someone.

How to identify a new quest is by an exclamation mark (

) on the top of an NPC's head. Quests are usually given by NPCs of the area.

If you are not finished with the quest, the color changes to a darker shade (

). If finished, report back to the NPC the quest is supposed to be turned into. The exclamation mark becomes a question mark (

Daily quests are the exact same line. The colors change however.

Some quests can be repeatable, can have a time limit, be a character level task, and or about the story of your adventure.