"Serena travels the night sky on her giant moon, sketching the world as she sees it below. She is the sister of the Eidolon Aelius but their relations seem to be on rocky ground. Nevertheless, her lunar magic always shines bright to illuminate allies' way to victory."

"Serena is envious of Master's ability to decorate weapons so beautifully."
"Perhaps Serena could try decorating her picture book as well..."
"Ah! Master is the best! Serena will get started right away..."

"Serena's illustrations are coming along nicely. But more colors would certainly be nice..."
"What do you say, Master? Can you get Serena some more colors?"

"Dance with me!!"
"I will try harder!"
"Don't try to touch my arms while I am connecting!"
"Thanks to your support, I can easily finish connecting."

"Did you know the heroes of old wrote the secrets of their mastery in books? If you find them, they could make your skills even stronger."
"I really admire those who risk their lives to heal others. They are the greatest!"
"The weather is foul, so make sure you bundle up! I don't want you catching a cold!"
"Hehe, do you think of me often?"
"You're so good to me. What can I do for you in return?"
"From now on, you can only summon me. Deal?"
"Your favorite Eidolon is me, right?"
"I wonder if humans and Eidolons can fall in love with each other."
"I'm really happy to just chat with you. It'll be great if everything could be like this forever..."
"You belong to me! I won't let anyone else have you!"

"Tell me about the Creation Myth?"

"What's the story of how the world began?"

"I heard that the Cube of Gaia is the source of everything."
"But no one knows where the Cube came from."

"Do you know the Goddess of the Moon?"

"I have never met the Moon Goddess. But I know she is a goddess, living in the eastern world."

"I have never met her. But I really envy her."
"I also want a rabbit! a pharmacist rabbit!"

"How did I look when I fought <Insert Elite Monster Name>?"

"You were awesome against <Elite Monster>!"
"I think I got distracted and missed my attack."

"I hear that every place has its own unique, famous dish?"

"Is there any cuisine cooked with carrots?"
"If there is, you must bring some for me!"

"I remember there's a huge lighthouse!"

"Well... I like all kinds of animals."
"But still, bunnies are my favourite!"

"Do you know that every place has its local specialties?"

"I often smell something nice. I imagine it must also taste delicious."

"I would like to know information about the auction house."

"I know a place where you can buy a lot of carrots."

"What's in the book?/What is the book in your hand?"

"This is not an ordinary book, it's my sketchbook."

"I love rabbits and carrots!"

"I don't like books. Books give me a headache."

"Would you allow me to sit on your moon?"

"You're too big for it. I worry it will break."

"Can I touch your tail?"

I want to touch your ears.

"Anything from you, I like."
"Carrots from you are my favourite!"

"Do you have a preference among seasons?"

"I also want to know your favorite season! You first!"

"Tell me some interesting tidbits about the Eidolons./I wanna know the secrets of other Eidolons."

"Tigerius Caesar is my good friend. Some times he carries me to catch the wind!"

"Are you and Aelius siblings?/I heard that Aelius and you are brother and sister."

"Younger Brother? What kind of brother would mislead his own sister making such a horrible mistake?"
"I don't have such a brother! And I don't want to!"

"Brother? I have no brother! After that shot, my brother was already dead."
"The guy you're talking about was only someone who looks like my brother."

"Why won't you meet Aelius?"

"Did. You. Mention. Aelius?"
"How dare such a despicable and shameless pest want to see me?"

"Hmm... Did Kotonoha put you up to this?"
"It must be her! She likes playing jokes on me!"

"I heard you are quite old."

"When do you normally go to bed?/Do you always go to bed late?"

"What's so special about Fame Quests?"

"Have you thought about your life after we part ways?"

"I just want to stay with you."

"What's your plan after we part ways?"

"I'll do whatever you say! Please don't leave me!" 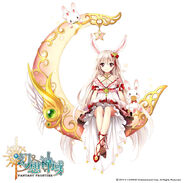 An illustration of Serena from TW AK 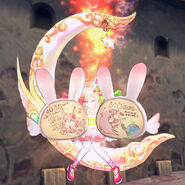 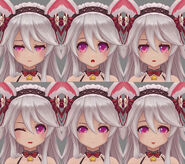 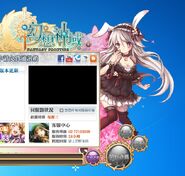