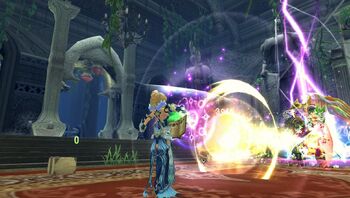 As the player level up to 40, the player can choose their second class to unlock Ultimate Skills with. Ultimate skills, combinations, also determine the character's main class and subclass.

Characters level 40 and up can steadily gain access to all the abilities of their chosen secondary weapon, granting a single character the potential to perform one of two roles at any given time. There is, however, yet another perk to secondary weapons.

Some weapons synergize very well with one other, and the end result is an arsenal of powerful combo attacks unique to specific weapon pairings. For instance, if a Duelist (whose primary weapons are dual blades) selects a Gunslinger’s twin pistols as a secondary weapon, they gain access to new abilities such as a sprinting shot in which they charge, stab, and fire a salvo at a target. That same Duelist could also opt for a Grenadier’s cannon instead, using attacks that combine the explosive power and rapid-fire shots of both weapons.

Likewise, caster weapons work extremely well together to create a wide variety of effects. A Sorcerer can take up a staff and gain access to new frost and wind AoE spells as well as a group healing ability. They can also select a Harp as their secondary and combine both weapons to summon fire spirits and smite enemies with holy blades of sonic waves.

The possibilities are endless, and fortunately the option is available for players to change their secondary weapon if they want to experiment with the combo attacks from other pairings. We think this one of Aura Kingdom’s most interesting customization options and we’re excited to see which combinations our players like the most!

The player can visit more combo skills in each class here.

Retrieved from "https://aurakingdom.fandom.com/wiki/Ultimate_Skills?oldid=27425"
Community content is available under CC-BY-SA unless otherwise noted.