Really, really sorry for the inactive-ness! But now I am back!! HOORAY. Cheers. Applause. Celebration. Just kidding. But this post is like over a month LATE, but just read it so you know we have added plans for the "Scythe" class in the wiki.

The twelfth class had already been announced on April 10th, 2014, in the TW Servers. The twelfth class is known to have a scythe weapon, which will be joining the "Magic" classes section for sure! Further information will be known when the beta opens for Aura Kingdom Online. New class weapon is not officially stated in English. Many people think it will be holding a scythe like the picture was shown... but the class's name would just be the hardest to guess. Some players call it the "Necromancer" class.

Watch the video below as a trailer for the 12th class and fast gameplay. 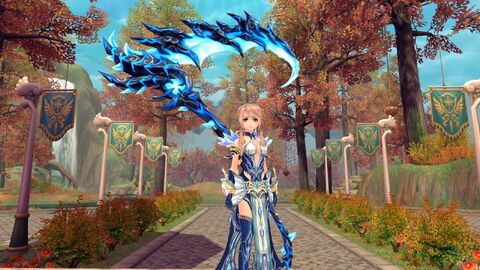 Retrieved from "https://aurakingdom.fandom.com/wiki/User_blog:KeyCode/New_Class/Weapon_Announced_on_4/10/2013_on_TW_Servers?oldid=27330"
Community content is available under CC-BY-SA unless otherwise noted.