Another story made in order to cure my writer's block. I got inspired writing it when looking through my folder of screenshots I took on an event held in potato salad.

I actually have no idea how Ayako is as a character, so everything I've written here is what I've been able to piece together from different sources. You can also say it's a temporal headcanon until we get more info about her.

When you start reading it, you'll notice how I'll refer Ayako as "it" instead of "she". You'll find the gist of it when reading through it. Also, this hasn't really been read through so I apologize for errors. Now, I hope you'll enjoy this non-nonsensical plot bunny of mine!

"Wow! This place is incredible!" a sweet, childish voice piqued. With its curious eyes wandering about every inch of the city, Ayako couldn't help but give a toothy grin over the world that has been opened before it. Yes, in the bastion of culture, it seemed like a certain Eidolon had set its eyes in the all-famous Navea. 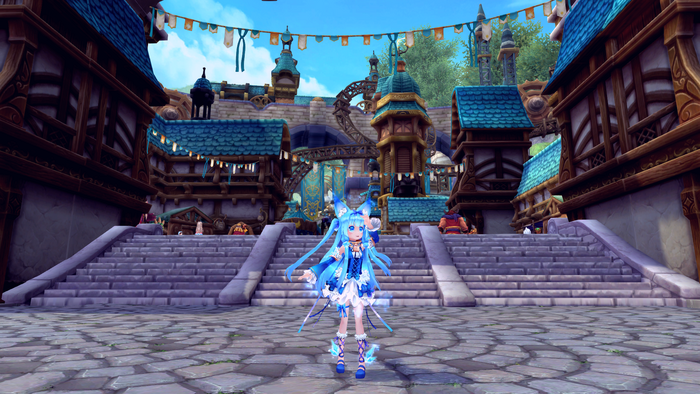 Its Master said to it to stay near the stairs while he went to check the auction house. But being the mischievous fox it was, Ayako decided a tour around the city was much more worthwhile than simply doing nothing. After all, Ayako was never the patient kind of fox, so Master couldn't blame it for seeking some excitement, right?

So with small yet quick steps ascending the stairs leading to Navea's gate, Ayako felt a spurt of zeal threaten to burst from its chest as it breathed in the air. After all these times in Pandemonium, where life was left to rot, Ayako longed for a realm like Terra where life truly flourished.

So far Ayako definitely took liking to the realm. So many unknown mysteries lies ahead! So many things to explore! It was a thrill Ayako had longed for so long.

Catching a moisty adolescent scent lingering in the air, Ayako grinned when recognizing the scent's owner. Behind the pillar next to the gate, Ayako stealthily sneaked up to the source with a big smile on her smile.

"AHHH Merrilee! You're my sun in my heaven! My moon in the night sky! So please! Will you be my-- wait huh?"

Entrusting a single red rose with a letter to his soon-to-be "lover", the Eternal Youth went from extremely tense to utterly confused when seeing the person before him. It took a while to register who was standing in front of him, but soon it hit him. Azure-dyed fox ears, a dress consisting blueness and whiteness, and a pair of big, innocent blue eyes deeper than the ocean. His dream girl was not standing before him, but Ayako was.

Bullets of sweat started to form from his forehead as he could only float frozen on spot. Not only wasn't it the person he expected to see, but Ayako of all people! It was well known to have a big mouth to gossip, and if everyone else would hear about him about confessing to it, the other Eidolons would bug him to no end about this! To make matters even worse, he was wearing his priced Dapper Suit!

Unable to form any words, the only thing that came out was futile stuttering. At this point, Serif was blushing more furiously than the sun itself. Someone, please kill the poor boy. He felt so repentant that he wanted to go to a corner and cry.

Ayako however just smiled at him and twirled the rose with her fingers. Unbeknownst by Serif, Ayako had no idea what he blurted out and assumed he just gave it a gift.

"Thank you Serif! Next time though, you should give Ayako candy instead!"

When seeing its oblivious smile plastered on its face, Ayako couldn't help but release a deep sigh and feel the worry drop from his shoulders. Normally a normal person would consider it impolite, but this was Ayako we're talking about. It probably wouldn't register an insult coming its way.

Whipping out two ice creams out of nowhere, Ayako took a long lick from one of it and handed over the other one to Serif. With creamy, glistening chocolate sauce covering a cone made of vanilla stacked over strawberry-flavored, Serif felt a line of drool run on his jaw. It was quite hot today and something cool as an ice cream would definitely rejuvenate him. A very tempting offer, but Serif decided against it. Knowing Ayako and all, it would probably try to steal it back as its greed for sweets was beyond this world. 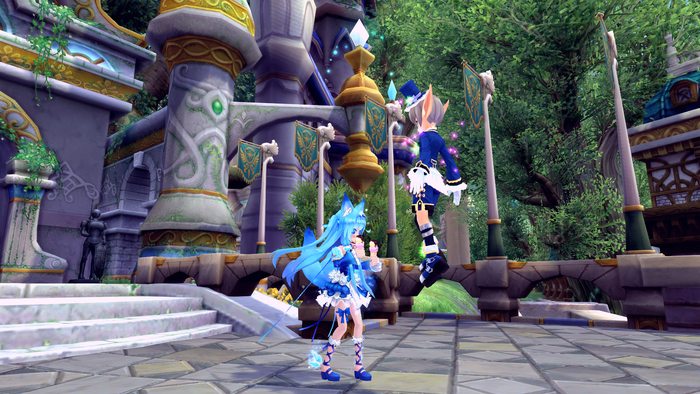 "Thanks, but no thanks."

Ayako just shrugged and licked the other one. With an evident blush dyed on its small cheeks, it was as if it was in love with the delicious ice cream itself. It made Serif smile a bit. It truly was a glutton when it came to sweets.

Speaking of Ayako, that reminded him about a thought that had been bugging him for quite some time about. "Is it okay for me to ask you a question?"

Not seeming to pay much mind to what he was saying, Ayako just nodded and continued to devour the ice creams. "What gender are you?"

It abruptly stopped eating, the tongue so close to the ice cream yet not moving forward nor retreating, as if the world just froze. Serif couldn't help but shiver a bit despite the wavering heat-haze surrounding them. He knew that curiousity killed the cat, but he couldn't help it. He really wanted to find out the truth.

Fortunately for him, the frozen state of Ayako didn't remain too long. With its big, innocent eyes penetrating his very soul, Serif could feel the regret crawl up upon his spine.

At least it wasn't mad, thank Gaia. Serif didn't know what to answer though. What else would it mean? It seemed pretty straight-forward to his comprehension, but one could never know when it came to Ayako.

Ayako just stared at him ludicrously.

"That's a weird question. Ayako is Ayako of course."

According to the other Eidolons, they got the same answer as him. No one really knows if it was a boy or a girl. Most Eidolons refer them as "her" since it obviously was a girl appearence-wise, but others points out that Hel and her family refer it as "him". Not to mention, documentations of the past also refers it as "he" so everyone wasn't sure what to say about the issue.

Since Ayako refused to spill the beans, Serif figured there was no point asking about it more. It looked like mysteries will remain as mysteries.