A very late Valentine's drabble I suddenly felt like writing. I got inspired when I thought back when my friend and I planned to become Guardian partners. Since I couldn't really capture the same fail moment in a fictional piece, I spiced it up with some cliché shoujo feels to make it easier to write.

Also this is mostly an attempt to cure my writer's block, so I only wrote it for the sake of actually writing something, so I haven't double-checked or anything and just wrote it along it goes. This is why I hate sleep orz.

If you find the references I dropped, I'll give you kudos! 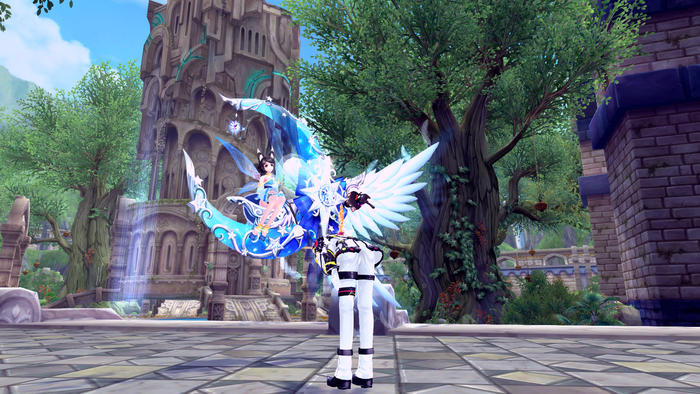 This was it. The time I've waited so long for, right then in that very moment. Today was Valentine's Day, and before me, sitting on a Dazzling Crescent like the Moon Goddess herself, was she. She was one of my closest friends, and ever since we heard about the Guardian Knight liaison, I couldn't help but long for such a relationship with her.

Bending straight down with a confession letter outstretched for her, my sight was glued on the dusty stone bricks. I didn't have the courage to face her directly, so the only thing I could do was to avoid seeing her face that set my heart on-beat. What if she had that dismissal look she makes whenever she sees idiots ruining Sky Tower raids? If I ever saw her frown directed to me, I don't know how I'd live up to that.

So here I was, fully aware of the risks of crossing those 10 centimeters. Rejection was scary, but inevitable if things wasn't meant to be. If I didn't confess now, I knew I'd end up in regret and lament over the loss. There were no people around, just the two of us, which as quite rare considering how lively Navea usually was. We both didn't like crowds, and I knew both of us would die of shame if one of us confessed in a crowd.

Still being in this embarrassing posture, sweat continued to drip from my face as my thumping heartbeat didn't want to calm down. Was she speechless? Was she in shock? Since I my eyes were glued on the ground, I didn't know what kind of reaction she had. While the noise of the duel battles could be heard in the distance, an awkward silence befell upon my shoulders.

Considering how mature and cool she was, I expected her going blunt on things like this. She was always passive when it came to someone beating around the bush, but if someone was blunt to her, she was, if not twice, as blunt to that someone.

With a gentle breeze kissing my blushing cheeks, I grew aware that I still stood there like a fool. My letter was still in my hand, probably soaked in sweat already. Why wasn't she replying? For each second that passed I grew more and more nervous. Different scenarios ran through my head, most of them extremely pessimistic with "the world is going to end"-ish kind of feel.

While I feared the look on her face, this painful embarrassment of me standing here like a fool was killing me. I wanted to dissolve into thin air if it meant to stop suffering from this abashment.

Besides, my back was killing me and I knew if she didn't answer by now, I wouldn't get an answer unless I faced her directly.

So with all my might, I freed myself from the stiff posture and stared straight into her sweet chocolate-dyed eyes.

Or at least, where they were supposed to be.

Inwardly panicking and clutching the letter for dear life, I almost felt my knees collapsing. Yes, the feel-alike feeling of defeat was that intense that my knees trembled. I felt so stupid for thinking this would work. Out of all scenarios, I wouldn't dream of this one actually happening.

Then I heard typing. A bit taken aback at first, I couldn't help but yelp as my gaze aligned upon a holographic screen. Ah, she used the I-ARMY communicator to reach me. I always forgot it existed sometimes despite wearing it on my wrist.

"Kotonoha told me telepathically that she found a pair of gorgeous wings on sale for cheap, so I went there ASAP before anyone else would get their hands on them. You looked really red before, I hope you don't have a fever. Anyway, I'll see you in the raid once it starts. See ya."

Crestfallen: the perfect word that described my feelings. This was even worse than being rejected. She didn't even notice me.

Let it down softly.

Retrieved from "https://aurakingdom.fandom.com/wiki/User_blog:Kyara39/notice_me?oldid=44343"
Community content is available under CC-BY-SA unless otherwise noted.